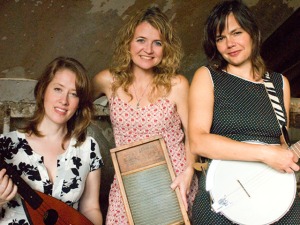 Flying Cat Music presents The Boxcar Lilies, an exquisite women’s trio, in concert on Sunday, October 26, at the Empire State Railway Museum located at 70 Lower High Street in Phoenicia. The show begins promptly at 7:30 p.m. with the doors opening at 7:00. Admission is $15 or $13 with RSVP to flyingcatmusic@gmail.com or by calling 845-688-9453.

The Boxcar Lilies are Jenny Goodspeed, Stephanie Marshall, and Katie Clarke, all highly talented singer-songwriters, who met in 2009 and discovered a shared passion for three-part harmony. Each is blessed with a rich and expressive voice. It’s one of the secrets of The Boxcar Lilies’ potent vocal blend. Their music is far too earthy to be described as pretty, call it unabashedly lovely instead. Jenny, Stephanie, and Katie were individually well-established performers before forming a group four years ago. That pull toward harmony drew them together, and the sound of their union has since caused quite a stir.

In February 2013, The Boxcar Lilies performed at the official showcase for the Folk Alliance International Conference in Memphis. Sugar Shack, The Boxcar Lilies’ second CD, debuted at #2 on the Folk DJ Charts in May (and subsequently was highlighted by both CMJ.com and eMusic.com in their roundup of exciting new releases). In August 2013, the Falcon Ridge Folk Festival included The Boxcar Lilies in the festival’s Emerging Artist Showcase.

Inclement weather forced the cancellation of a concert The Boxcar Lilies were scheduled to appear at for Flying Cat Music in December 2013, and, since then, the buzz about them has only grown. The final rankings for the Folk DJ Top Albums of 2013 had Sugar Shack finishing as the #11 album of the year. Additionally, the 2013 Falcon Ridge Folk Festival audience vote for Emerging Artist Showcase favorites was announced this Spring, winning The Boxcar Lilies a coveted “Most Wanted” spot on the roster at the August 2014 Falcon Ridge Folk Festival.

“Folk,” of course, is an elastic term. With The Boxcar Lilies it frequently has a country feel, harkening back to pre-formula days when the narrative still seemed real and the emotions rang true. “Rooted in folk tradition, their sound is completely contemporary in the vein of Gillian Welch or Neil Young.” is how CMJ.com describes the Boxcar Lilies’ music. The Boston Globe says, “They play an engaging mix of folky bluegrass and acoustic country with prominent twining.”

That intricate vocal twining is the other core element of The Boxcar Lilies’ trademark sound. An interview published in No Depression casts light on both the process used and the commitment made by The Boxcar Lilies toward that goal: “A lot of the time we’ll just take a song and start riffing and trying things out. Sometimes it goes very quickly. Other times it takes a few rehearsals for us to find the magic. We’re looking for unexpected moments, moments that give us goose-bumps or that create a sound where ‘the whole is greater than the sum of its parts.’ And we don’t rest until we find them!”

While their harmonies alone can be mesmerizing, the songs that they pen amplify the spell. The Boxcar Lilies are deft at song craft. Alternating bright and cloudy moments, like a partly sunny day in their home state of Massachusetts, you can feel the weather change as their lyrics move across your mind. That’s a clear indicator of strong songwriting, and The Boxcar Lilies excel at carrying their listeners away. Combine all of the above with the skill these three women evidence on guitar, clawhammer banjo, concert ukulele, electric bass, and washboard and the growing popularity of The Boxcar Lilies is easy to understand.