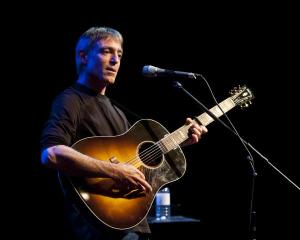 Flying Cat Music is pleased to present folk balladeer Chuck Brodsky in concert. He will be performing at the Empire State Railway Museum on Wednesday, April 10, 2013, at 7:30 p.m. Tickets are $13 advance or $15 at the door. For information and reservations email flyingcatmusic@gmail.com or call 845-688-9453. The museum is located at 70 Lower High Street in Phoenicia, New York.

Chuck Brodsky was named, “One of the finest singer-songwriters in America,” by Larry Groce of NPR’s “Mountain Stage.” Penguin Eggs, Canada’s leading Folk and World Music magazine, says, “Brodsky’s unquestionably the best folk ballad songwriter currently in America – bar none.”And it’s not just North Americans who feel that way about him. The Limerick Leader â€“ that’s Limerick as in Limerick Ireland â€“ calls Chuck Brodsky, “one of the finest singers and songwriters to emerge from the US in recent years.”

In short, Chuck Brodsky is a remarkable, and always memorable, singer-song writer. Not all songs tell stories, and not all stories are worth the telling, but listening to Chuck Brodsky sing his songs is like living other lives. That’s how skillfully he spins his spells, and the stories Chuck Brodsky shares are as epic as a childhood memory, and as simple as war and peace.

In a glowing review of a June, 2011, live Chuck Brodsky performance in London, England, No Depression magazine observed, “To move an audience almost seamlessly from laughter to tears is a real skill and tonight there was no doubt that Brodsky is a master at doing just that.” It is a journey all of his audiences take. That is the trademark Chuck Brodsky effect. Chuck renders ordinary lives extraordinary, and the extraordinary easy to grasp. He does so at times with wry humor, at other times with scathing wit, frequently with poignant touches and always with an eye for detail that captures even fleeting truths with dead on accuracy.

For those of you with a soft spot for our national pastime, a Chuck Brodsky concert offers a special treat. As Arthur Wood of Folkwax notes, “this guy skillfully pens knockout songs with frightening regularity,” which gives Chuck the ability to both chronicle the world and still find time for some loving odes to his favorite sport. Nestled among Brodsky’s many other releases is a CD called Baseball Ballads, and Chuck has nine of his songs archived in the Sound Recording Library of the Baseball Hall of Fame,

Based in North Carolina, Chuck Brodsky is a touring musician who hops continents regularly. Flying Cat Music is honored to have an opportunity to host him here in Phoenicia. We owe a special debt to our friend Tom Pacheco, a great folk musician already known to many of you, for originally urging us to book Chuck Brodsky into the Flying Cat Music Railway Concert Series.