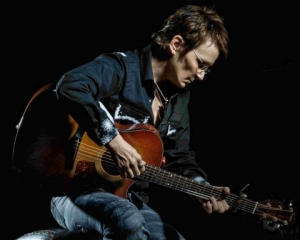 Flying Cat Music is honored to present nationally renowned singer/songwriter Mary Gauthier in concert on Saturday, September 28, at the Empire State Railway Museum. The show starts at 7:30 p.m. with the door opening at 7:00. Tickets are $18 with RSVP or $20 at the door. For information or reservations email flyingcatmusic@gmail.com or call 845-688-9453. The museum is located at70 Lower High Street in Phoenicia, NY 12464

What do Alabama Shakes, Mumford & Sons and Mary Gauthier have in common? They are all prior winners of the Americana Music Association’s New/Emerging Artist of the Year award. Mary took home that award in 2005, but it wasn’t the first time her uniquely penetrating music got critical notice. In 2001, New York Times music writer John Pareles called Gauthier’s Filth and Fire CD the number one Indie release of the year. Not bad for a woman who didn’t write her first song until age thirty-four. It took time for Mary to emerge from some difficult early years; having done so, she hasn’t stopped looking back.

There is something palpably immediate about Mary Gauthier’s songs. They don’t contain detours. Her music strikes an emotional chord and drives the point home with lyrics as straightforward as they are deeply resonant. Mary, quite simply, writes songs about us, all of us. She strips the veneer off of ordinary moments and leaves the splinters exposed. To quote the L.A. Weekly, “Gauthier’s skill in balancing a profoundly personal tale with classic underpinnings ultimately hints at the evocative idea that all our lives are full of events that touch on the mythic and the timeless.”

If you’re getting the sense that a Mary Gauthier concert might not be called light entertainment, you’ve got that right. Her performance is fully entertaining; it just isn’t light. The Folk & Acoustic Music Exchange calls her music, “as powerful as a Mike Tyson punch.” American Songwriter Magazine says this of Mary, “Gauthier rejects mainstream entertainment values, the showy mastery, perkiness and polish that aim at providing musical diversion and courting mass popularity. Hers is a confrontational art, especially in a live setting. She directs attention to the unsettling side of contemporary American society.”

Gauthier’s music isn’t inevitably dark, but it is real; real in a gritty sense; real like Johnny Cash stayed real from the bottom to the top, with a similar thread of redemption running through many of her stories, as well as her life. On her website Mary Gauthier describes the back story to one of her must requested compositions: “Writing ‘I Drink’ required a perspective that an active alcoholic is not capable of, and a non-alcoholic cannot fully comprehend. I needed to go through what I went through to write it, and today I would not change a thing even if I could because for me, inside the curse — lives the blessing. The wisdom, vision and compassion that comes from taking a stroll to hell and back cannot be obtained any other way.”

Currently residing in Nashville, Gauthier is touring the Northeast on the heels of releasing her first live recording, Live at Blue Rock. It was a long time coming. “People have been asking for a live CD for a long time and I just knew that I wasn’t ready yet,” admits Gauthier. “It took ten years of trench work. Of bein’ out there, banging my head against all the things an artist has to bang against.” The wait was evidently worth it judging from the critical response:

“Live at Blue Rock might just be Gauthier’s best album. That’s saying something when you consider the critical acclaim that surrounded her six previous albums” —Nancy Dunham, The Alternate Root

“Having spent more than a decade honing her craft, alternative country maven Mary Gauthier at long last serves up a concert album in the fantastic Live at Blue Rock—Jeffrey Sisk, The Daily News (Pittsburgh Metro)

“Watching Mary Gauthier in concert is something akin to a religious experience. Nowhere is her success more evident than in her live performances, such as captured on LIVE at Blue Rock.”
—Nancy Dunham jambands.com

“There is no recommendation strong enough for this record.”
– Chris Bell, Ear Buddy

As Randy Lewis of the Los Angeles Times aptly puts in describing Gauthier’s body of work, “With songwriting as powerful as hers, there’s no need to go looking for qualifiers…She’s a unique, intrinsically valuable musical voice. And there’s never a surplus of those.”

Mary Gauthier regularly headlines music festivals across the nation. Her upcoming show at theEmpire State Railway Museum in Phoenicia presents a rare opportunity for fans, both new and old, to see her performing in a truly intimate setting; one that is near to her heart as Mary’s repertoire of train-themed songs attests to. Mary Gauthier’s performance will be preceded by a brief set by one of the Hudson Valley’s most powerful singer/songwriters, Dave Kearney. Don’t miss any of it.